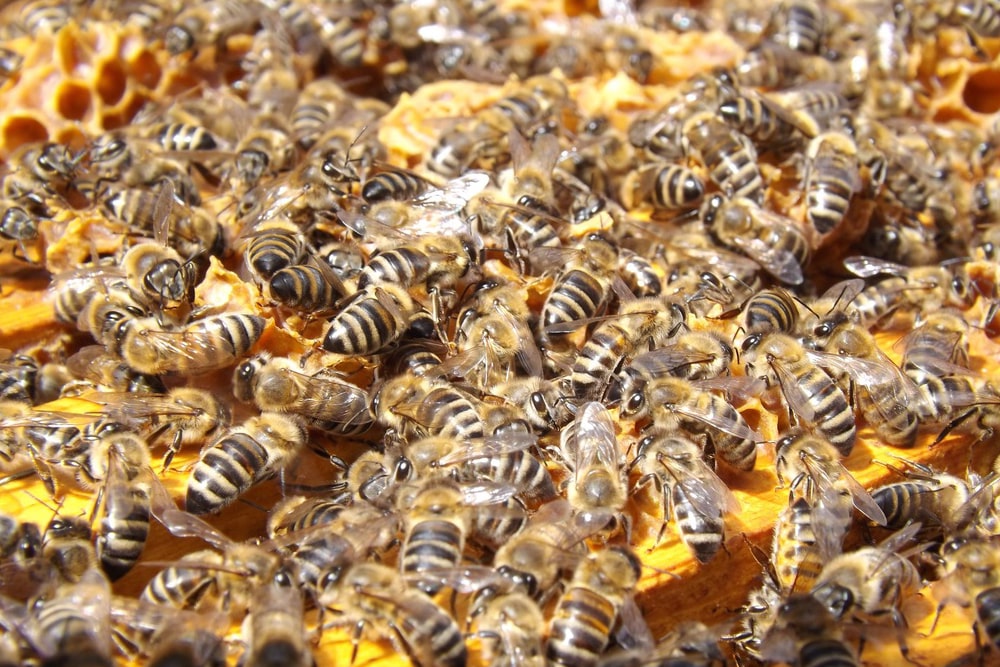 Like most creatures in nature, bees live within different cycles. As each day comes and goes, and as the seasons pass, their lives and behaviors change.  This is especially relevant to any beekeeper, who will need to know the cycles of their bees to keep them productive and healthy.  It also becomes pretty quickly important to someone who may have to move around a hive that has decided to set up residence on their property uninvited! So let’s take a look at some of bees’ cyclic behaviors throughout the day and year.

The Daily Cycle of Bees

Let’s start with the day to day flow of bees, as the questions of what time of day do bees come out, and when are bees most active is going to be relevant for anyone around bees.  The main answer to this is, it depends.

What Time of Day Do Bees Come Out

Much of the time this ‘depends,’ comes down to temperature.  Honey bees are significantly affected by temperature, so when bees leave the hive in the morning, and when they stop nectar gathering and return to the hive in the evening are going to often come down to how cold it is.

This is because once it drops below 50-55 degrees Fahrenheit, or about 12 degrees celsius, honey bees will get drowsy and start essentially falling asleep.  So any bees which start flying in cold temperatures will not get far before starting to go dormant.  So what times bees will be active during the day is going to depend on the season you’re in and where you’re at geographically, as a minimum because of their effect on temperature.

This explains why you don’t see much of bees in colder weather, and also why bees are rarely seen out of their hives during the winter.  They do come out to an extent, to get rid of waste, take out any dead bees, and any other necessities but for the most part they stay in their hives and focus on keeping warm, leaving nectar collection to the warmer seasons.

Regardless of temperature, bees also minimize their activities during significant rain, and usually work their ways back to their hive at night about an hour before sunset as they cannot see well enough in low light to keep working outside the hive (but will certainly stay busy inside the hive after lights out).

What Time of Day Are Bees Most Active?

So generally speaking honey bees most active time a day is going to be in the early afternoon, with activity starting somewhere in the morning, and stopping a bit before sunset. In warmer months the amount of time they’re out of the hive will be longer than in colder months.  That said, even in the spring and summer months when nectar is at its most available, and temperatures are fairly warm, with good light even early in the day, bees may still avoid coming out too early due to dew covering flowers and making it hard to collect.

If you’re asking when are bees least active, it’s going to be outside this window; either earlier in the morning or later at night.  If you’re going to get close to the hive, however, the guard bees will always be ready outside of the coldest weather, so you’ll want to be properly attired and ready to smoke them as needed.

If you’re looking to harvest honey as a beekeeper, most beekeepers actually choose the peak of their hives activity, as most of the bees will be out of the hive foraging at the time.

When Is Bee Season

As we’ve said so far, you’re pretty unlikely to see many bees during winter, and even not a whole lot just on colder days.  And we know that bees are going to be busy throughout wildflower season to store away as much nectar as they can.

But what about the rest of the year?  When is bee season? When is their peak of activity, and when do they hibernate?  When do new queens split off to form a new hive?  There are a lot of these questions we’ve seen flying about from bee enthusiasts and would be/new beekeepers, so let’s look at what bees are up to throughout the rest of the year.

The beginning of the year (assuming you’re in the northern hemisphere) is a pretty quiet time for honey bees.  The majority of the hive is focused on simply staying warm.  Honey bees are actually able to decouple the muscles they use for flying from their wings, and use them to shiver intensely, which within the insulation of a hive keeps them warm enough to survive the cold of winter.  With their queen at the center of a densely packed football shaped mass of bees, the hive waits for spring.

On the warmer days here and there, worker bees will take short flights to defecate outside of the hive, and remove dead bees, but no nectar harvesting is going on yet.  While no drones will be present, some of the hive will be at work raising the next brood of workers.

Not much has changed from January in the hive, with a lack of drones continuing, and little leaving the hive besides the occasional defecation flight on more opportune days.  The queen will, however, start laying a few more eggs each day as winter continues to pass.

With winter moving towards it’s close, the adult population of the hive is at its lowest, and we see the queen starting up her egg production.  It also means that as their time sequestered comes closer to its end, the majority of their stored food will be depleted, especially as the new brood increases in size and creates more mouths for food stores to feed, with minimal if any nectar forage coming in.  This is the most dangerous time a hive has for the potential of starvation.  While hive starvation is generally unlikely, it’s still a possibility, so beekeepers will need to be ready to supplement food for the hive if needed. Most often supplementing with dry sugar, or potentially pollen to help support ramping up brooding.

In most places, sometime in April will see the first early flower blossoms pop up, and with them we will start to see the first drones start to appear.  The expansion of the colony will speed up dramatically as brood rearing heads towards it’s zenith.  This is the beginning of the bee season as far as seeing bees out and about, and their start of foraging.  All of this is dependent on weather, however.  On colder days the colony may still cluster, and if the weather has too many days dipping below 50 degrees, a chance of hive starvation continues.

By May, pollen and nectar should be flowing pretty well, fueling increasingly intense growth in the hives population.  The queen will be at the peak of her production in May, and the brood will be nearing its largest size, with the drone population also increasing.  The hive may be getting ready to swarm, which is when a new queen and a portion of the hive will split off to find a location for a second hive, all flying out at once and grouping on a nearby branch until scouts have found their final destination.

Honey bees being kept for honey harvest, may have a small amount of honey taken at this time, especially if they have access to early season rape seed nectar.  Bee season has now started in all forms.  Because their stores are depleted from winter, so they have less to protect, and much of the hive will be spending their day foraging, honey bees will be less defensive around the hive during May.

By June, if the hive has not swarmed yet, it will be at its largest population, and the queen’s production will usually start dropping.  Beekeepers will want to consider artificially swarming their hives if they haven’t done so on their own.  Honey harvesting may start around now, and will likely be a necessity if kept bees have access to early season rape seed nectar.

If good weather is to be had, July is when the peak of nectar collection will occur, while the queens’ reproductive rate continues to drop, with some drones still around to continue mating with the queen.  Swarming is usually winding down by mid July.  As heat is often at it’s high point, you may find the bees ‘bearding’ on the outside of the hive to cool down through the evening.

With the end of summer comes a significant drop in activity outside the hive as nectar availability is usually pretty low by this point, but workers will still be seeking to store as much nectar as possible.  Some drones are still present, but the colony size begins to drop with increasing rapidity as brooding doesn’t keep up with the numbers of bees lost.  A second smaller swarm season may be seen between August and September.  You may still see bearding on the hottest days.

Autumn has arrived, and so ‘bee season’ has essentially ended.  Drones will very suddenly entirely disappear, with the remainder of those not naturally dying chased out of the hive by worker bees.  The queen will likely stop all laying by the end of September.  Nectar supplies will almost all be gone, but some collection of resin/propolis will continue.  In order to protect their now highest stores of food for the winter, the bees will be entering their most defensive behavior around their hive.  Beekeepers will generally take their final harvest now and look to start any Winter feeding regimens for their bees.

The hive is nearing its period of dormancy, with bees preparing themselves for the winter.  On warmer days you may still see some active bees, trying to find what food sources they can to add to winter stores.  On colder days, a cluster of bees will already have gathered to maintain heat.  Beekeepers are getting to any final preparations for the hive to keep it safe and secure during the colder months, finishing supplemental feeding and deploying any protections against would be predators (especially mice!).

Activity in the hive drops down even more as temperatures drop and the bees only rarely leave the hive.  By the end of November, the population of the colony will likely have clustered into a dense grouping to stay warm, and spend most of their time in this pattern until Spring.

At the start of winter the bees will be at their lowest activity, coming the closest to actual hibernation.  Honey bees do not in reality hibernate, but very few people would be able to tell the difference.  During December, many beekeepers will not even visit their hives.

In summary, while bees don’t actually hibernate, between October and February a honey bee hive will be at its least active, focusing on staying warm.  Starting in March the great forage will begin as temperatures start to rise and flowers begin to open.  Foraging will continue all the way until August.  Honey harvest may start as early as June, with the final harvest being in September.  Looking at any given day, the bees will leave the hive once the heat lifts to somewhere above about 55 degrees, usually not earlier than mid morning, peaking in the early afternoon, and returning either when temperatures drop below 55 or an hour before sunset at the latest.